Waking up in the motel was nearly impossible. We’d drawn the room-darkening shades against the lights of the parking lot in the night, but the same shades blocked our view of the lightening sky.

When my alarm went off at 5am (which has been my natural waking time on the trail), my body still believed it was the middle of the night. Spartan, T-Pain, and Carjack must have felt similarly, because no one moved for half an hour. When I finally got up, they only stirred after I opened the curtains and turned on the light.

I packed my things while eating strawberries and drinking cold coffee I’d bought the day before. Then we all piled into an Uber bound for the Interstate 10 bridge where we’d gotten off trail the day before.

As we pulled up to the trail, we all started laughing and had our driver honk his horn. Hiccups, Danish, Brightside, Hot Hands and Gables, who had stayed at a different motel and coordinated their own ride, had just pulled their packs out of their own Uber. We chatted happily as we rejoined the trail and began walking across the valley towards the mountains and our next resupply: Big Bear.

The clouds that had obscured the summit of Mt. San Jacinto for the past couple days had finally lifted, and as we hiked north, we turned around repeatedly to look up to the summit we’d shared just two days prior.

Without cloud cover, the day was hot. My sweat caked in salty streaks on my sunglasses, and I tugged my sun hood snug around my face, trying to shield myself from the heat and light.

The trail followed a steep, dry drainage to its head, but before reaching the divide, Spartan spotted a low tree that was casting deep shade. We couldn’t resist a break, and despite having walked only five miles, we rested for a full hour, hiding from the sun, teaching the Danes relevant slang terms (e.g. “pounding a bag of chips” means eating an entire bag of chips very quickly) and debating the meaning of the term “nature” (specifically, Danish argued that manmade things constitute “nature,” and some of us disagreed rather vehemently).

When we finally found the motivation to move, the heat had only increased. We followed the trail as it contoured in and out of small drainages and then switchbacked down to the Whitewater river. By the time we reached the riverbed, our group had strung out in the heat so that we were each walking alone.

The river was large (by SoCal desert standards) and braided, and the trail followed its bed upstream for nearly two miles before the crossing. I began walking these two miles at nearly noon, and the midday sun beat down without mercy as I made my way through the dry gravel and stone cobbles deposited by some formerly active braid of the river. I stopped to take pictures of blooming cacti, lingering to let myself cool down before continuing up the trail. The air in the valley was still, and it felt as though I was walking through a solar cooker.

My mind was blank, working only to keep the rhythm of my footsteps and to track with the trail as it disappeared and reappeared in the sand and gravel.

At long last, I reached the river crossing. I found Gables and Hiccups resting in the shade of a small cliff and joined them for some lunch. One by one, the other members of our trail family stumbled into the shade, each new arrival looking more flushed and exhausted than the last.

I sat in the sand, eating peanut butter out of the jar and crunching potato chip crumbs. The highlight of my lunch was the still-cool cucumber I’d carried out from town.

Feeling reinvigorated by the influx of calories, I took off my shoes and stepped gingerly down to the water. My toe test revealed that the water was pleasantly cool but certainly not cold.

I stripped to my underwear and stepped into the current. The river was shallow but swift. I kneeled in the water and dunked my head, then sat and tried to fully submerge myself by lying down. On my back in the rushing water, I couldn’t contain my laughter as the river started to push me downstream over the smooth stones in its bed. I sat up and steadied myself, my back to the current. Water engiulfed me from behind, rising up my back and around my arms. I felt the hot sun on my face and looked south over the hills to the snowy summit of Mt. San Jacinto. All I could do was smile.

I sat, feeling the power of the river and the sun, and marveling at the beauty of the mountains. Danish, Hiccups, T-Pain and Brightside came out to join me, and we laughed in the water, beaming at one another, overflowing with sheer joy. 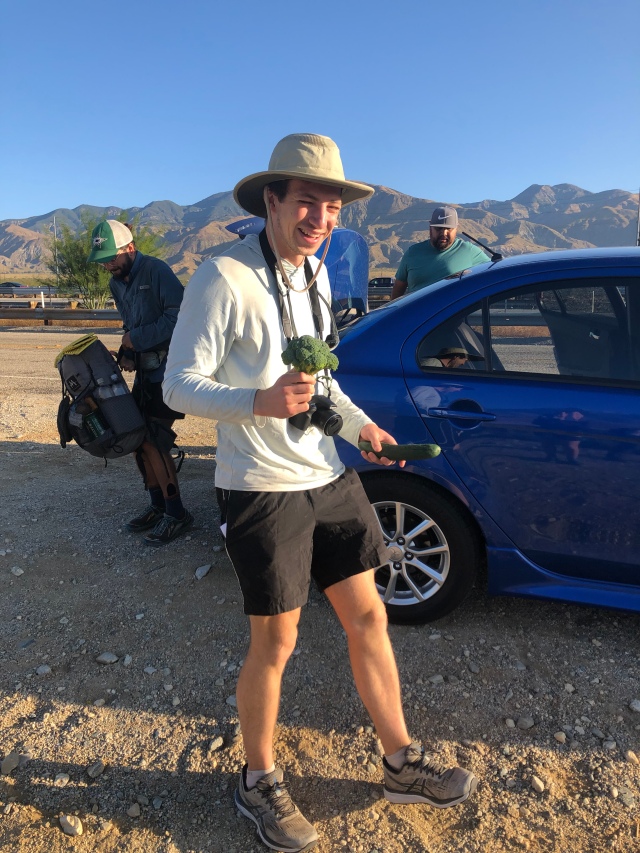 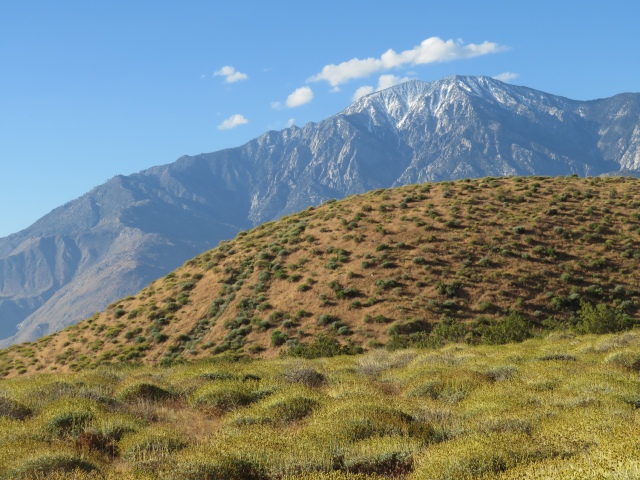 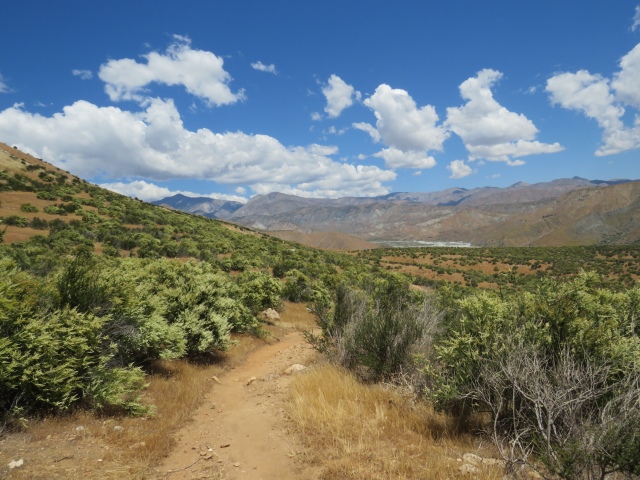 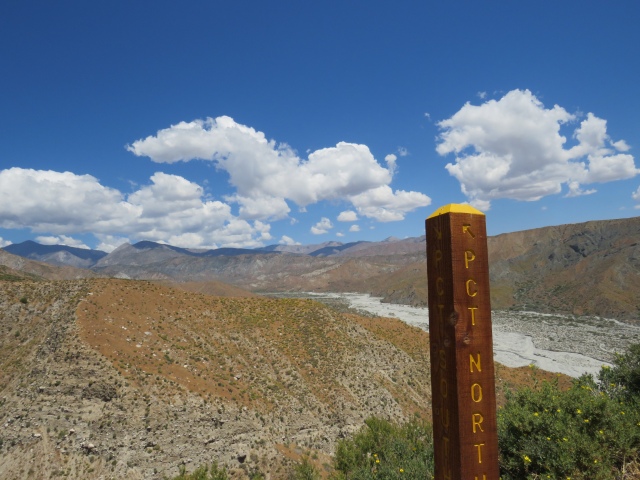 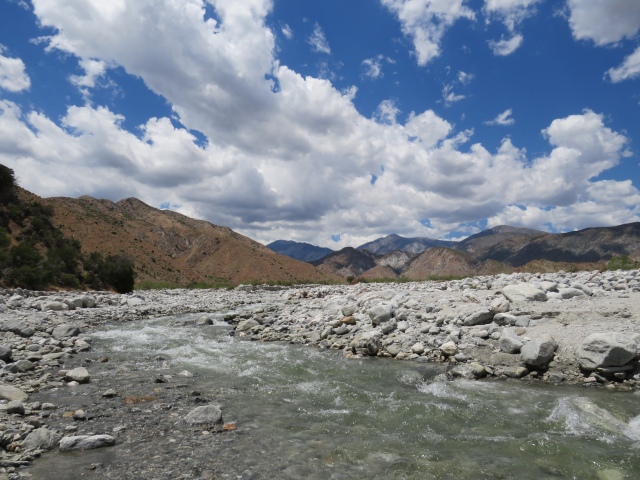 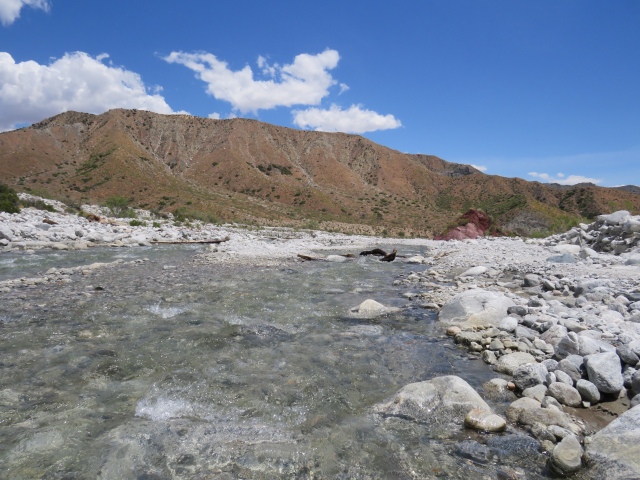 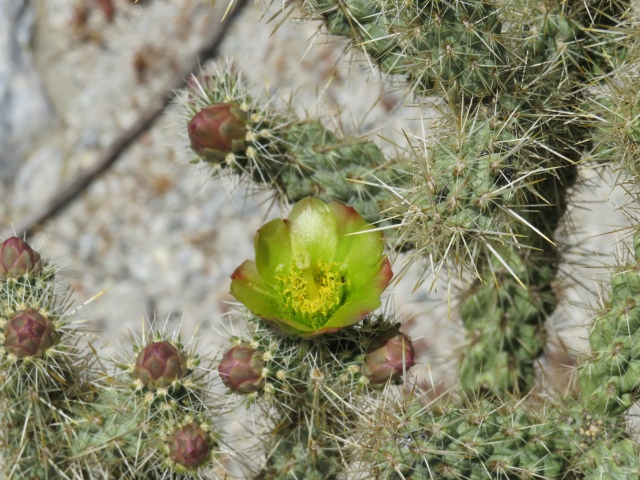 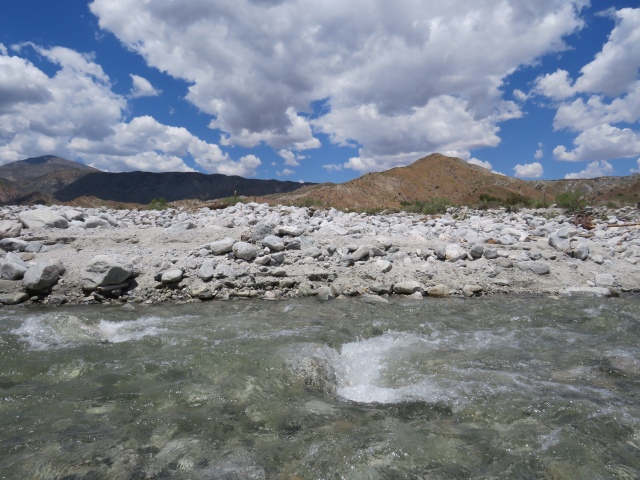 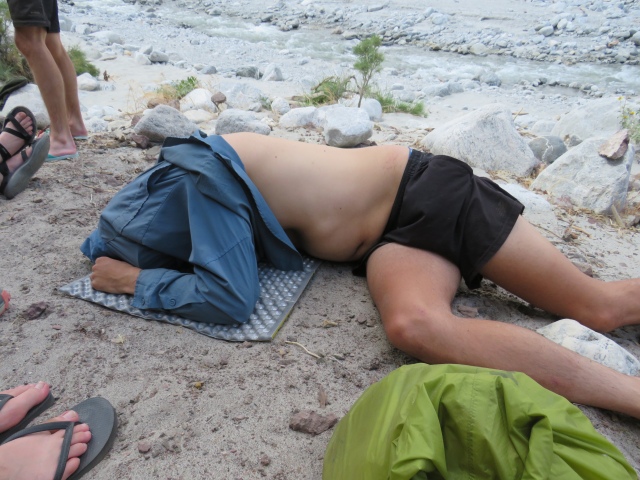 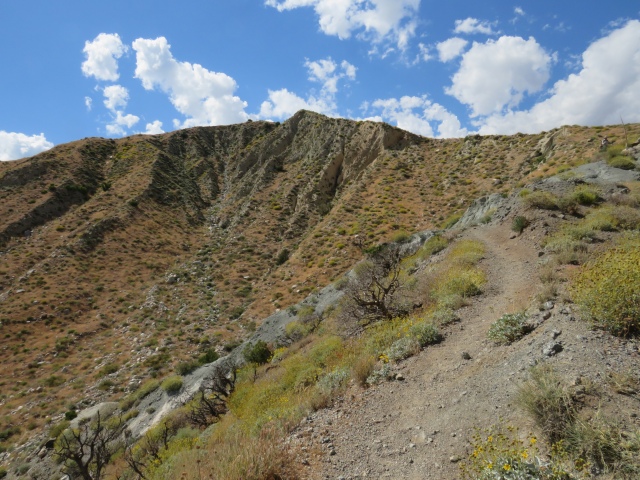